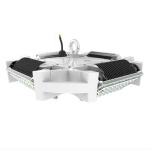 The Spreader from Hortilight is a top class LED grow light with passive cooling, equipped with many possibilities for both the hobbyist and the professional grower.

The Spreader is extremely energy efficient thanks to the use of Philips Horticulture LEDs with an efficiency of 2.8 μmol/J. By using a renowned MeanWell LED Driver and a highly transparent 120° lens, a system efficiency of 2.4 μmol/W is achieved! In addition, the Spreader has a connection for a control controller, so that a rising and setting sun can be simulated, making the lighting even more efficient.

The light spectrum of the Spreader has an Emerson Enhancement Red/Red ratio. The effect is that the rate of photosynthesis is not just the sum of the 660nm + 730nm photosynthesis reactions. No, the combination of the 2 reactions generates a biological energy response that is greater than the sum of the two reactions separately (see graph). The balanced light spectrum allows plants to develop naturally, which contributes to optimising yields, both qualitatively and quantitatively!

The Spreader is equipped with 4 LED units that can be individually aimed at the plant surface to be illuminated. This makes it possible to distribute the light intensity very evenly over the crop and therefore use the light more efficiently. Speader therefore has the highest energy efficiency rating.

If the Spreader is used as a stand-alone unit, a HortiLight LED Controller with remote control can be used to set the lighting schedules. This enables you to simulate sunrise and sunset, making lighting even more efficient.

Unlike standard LED grow lights, a HortiLight Spreader requires no maintenance. The LEDs are cooled passively by the aluminium frame and therefore do not need to be actively cooled by fans. Fans attract dust and should be checked regularly and cleaned if necessary. In addition, rotating parts, such as fans, do not last as long as LEDs and will therefore need to be replaced at some point.

An additional advantage is that the Spreader is completely silent due to the absence of fans!

The HortiLight Spreader is IP65 waterproof, which means that it can be used in cultivation areas with high humidity.

The use of high-quality components and a well-thought-out design ensures an extremely long lifespan, even under the harsh growing conditions. The HortiLight Spreader therefore comes with a 3-year warranty as standard and can be extended to 5 years as an option.