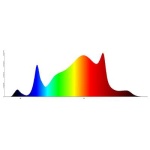 The Quantum 240 is primarily equipped with the high efficiency LEDs from Samsung, namely the LM301B. These LEDs produce a lot of light per Watt of current consumed and are also very durable. Deep red OSRAM LEDs guarantee extra luminous power for flowering plants. In addition, the spectrum has been supplemented by a little UV light. UV light also prevents the formation of mould and pests in a grow room.

The Quantum 240 is equipped with a simple Dim Controller with which the light intensity can be adjusted to the needs of plants in each phase of the exposure cycle. Multiple Quantum 240 Boards can also be linked together by means of a daisy chain, so that all the lamps can be operated with one dimmer button.

An additional advantage is that the Quantum 240 does not need any maintenance because of the absence of fans! Fans attract dust and need to be checked and cleaned regularly. Also, rotating parts such as fans do not last as long as LEDs and will therefore need to be replaced at some point.