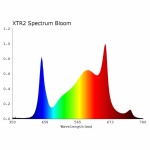 The Spectrabox XTReme series of Led Flower Growlights (LFG) is an energy-efficient, sustainable and fire-safe lighting system for indoor cultivation.

The Spectrabox XTReme is equipped with a combination of 0.5W extremely high efficiency LEDs and 3W high power LEDs. This results in an average LED efficiency of 2,8 µmol/J. In addition, the applied LEDs do not need a lens, so an extra 10% light output is achieved compared to LED grow lights that are equipped with lenses. This makes the new Spectrabox XTReme approximately 35% more powerful than its predecessor!

In terms of operation, the Spectrabox XTReme is a real no-nonsense grow light. The Dual Spectrum is operated with just one switch, so plants get exactly the light they need for use in a dark growing space. During the 18/6 light period the Spectrabox has a spectrum tailored to the growth of plants. In the 12/12 flowering stage, additional red bloom LEDs are switched on, giving the Spectrabox XTReme an optimum flowering spectrum.

The Spectrabox XTReme features a durable aluminium frame with robust hammerblow scratch-proof covers. And of course, the new XTReme is also finished in the yellow house colour which has distinguished the Spectrabox since 2008.

The light spectrum of the Spectrabox XTReme has an Emerson Enhancement Red/Red ratio. The effect is that the degree of photosynthesis is not just the sum of the 660nm + 730nm photosynthesis reactions. However, the combination of the two reactions generates a biological energy response that is greater than the sum of the two reactions separately (see graph). The balanced light spectrum allows plants to develop naturally, which contributes to optimising yields, both qualitatively and quantitatively!